Presentation Is Half The Battle

The 2018 Formula One season is now underway, with the season opening Australian GP being claimed by Ferrari's Sebastian Vettel. It was a mildly entertaining race, with storylines like the double retirement of Haas and an impressive drive by Fernando Alonso for a confidence boosting 5th place finish.
It was a great start to the season...unless you were watching ESPN's coverage here in the United States. My God, what the hell was that? When we heard that The Worldwide Leader bought TV rights to F1 here, we all knew it was probably going to be less than stellar, but the maiden voyage of this TV deal was such a far cry from the days of Speedworld that it was genuinely depressing.

At 12:30 EST, ESPN hit the air with "F1 On The Grid," a simulcast of Sky Sports' prerace coverage, because apparently hiring a host or two for homegrown coverage was just too expensive. The only problem was, Sky wasn't even on the air yet, so we at home got static shots of turn cameras and spectators in the grandstands for 10 minutes. It didn't take long for everyone watching to take to Twitter to express their rage.

Then, The Worldwide Leader just gave up and dumped to reserve programming, something called "E:60's Dominant 20." They claimed technical difficulties. Whatever.
Look, it's bad enough you went to reserve programming, but it didn't even have anything to do with racing of any sort, let alone F1. Go to qualifying, have a season preview show from Sky on backup, DO SOMETHING. But they didn't. 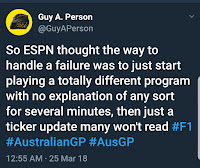 So finally, the race went green and all seemed well. As awkwardly timed as the breaks were, at least they were in side by side.
Well, okay, that sucked too. No warning of when breaks were coming, no updates upon return. Missed retirements, restarts, replays. Imagine if something big had happened, like a crash or a retirement by a frontrunner, not only would it be covered up by 3 minutes of Super Beta Prostate commercials, we'd be at the mercy of wherever Sky happened to be in their breakdown of the event.

By the time the race ended, frustration with presentation had set in for many. The hard, awkward, sign-off free cut from the race to another 30 For 30 ( ESPN's 30th anniversary was 2009 btw...) made no sense either, and served only to antagonize viewers.
Conspiracy theories emerged.

Look, I don't know much about producing television. My only experience in the game would either be in low power TV with equipment from the 80s, or my time in pro wrestling, with largely consumer grade equipment. But I was taught one thing that has stuck with me, and that's that presentation is half the battle. Sky provides wonderful, commercial free coverage for F1 fans across the pond. F1's camera work and presentation of races is world class to say the least. The pieces are there, and all ESPN has to do is put them together like a toddler with a Lego set. Take what you're given, and if you give a damn, hire a producer, hire an announcer, even if it's to emulate Bob Varsha for Formula E on FOX, bringing viewers back from break with a recap of anything missed. DO A-N-Y-T-H-I-N-G besides what we saw last night. It came across as amateur, low grade, and just bad.
I know caring about motorsport hasn't been within Disney's character in the last 15 years, but what we got this weekend was embarrassing. It's just sad. All the growth that F1 may have seen in the US with NBC in the last 5 years may well have been Old Yeller'd in less than 3 hours by a company once known for providing the absolute best in motorsports television.
If presentation really is half the battle, this is one that ESPN will lose. And it's a damn shame.
F1 fans deserve better.
Posted by Lucas Caylor at 2:19 AM